Here’s a little-known fact about culverts—during war times, large culverts were occasionally used as makeshift bomb shelters for locals. They’d have to be fairly large culverts, sure, but some of the exceptionally large ones were built with a concrete platform above the water that flowed underneath.

At G. Douglas Vallee Limited, we don’t build many bomb-shelter sized culverts, but our Guelph culvert engineering operates along a similar principle: Create something sturdy, long-lasting, and that can withstand outside forces. Doing this requires exceptional planning, design, and use of the correct materials—and because our team has over 300 combined years of experience, we believe we’re the team who can tackle the job and do it right.

And since we’re a company based in southern Ontario, we’re familiar with the local environment and the landscape—as well as what kinds of precautions need to be taken for wildlife and habitat protection, which is especially important in areas both inside and outside of the city.

A well-constructed culvert will not only do its job, but will blend into the landscape without becoming an eyesore, and help to prevent erosion of the surrounding soil and resultant structural damage. Don’t take a chance on your culvert! Give G. Douglas Vallee Limited a call for your next Guelph culvert engineering project. 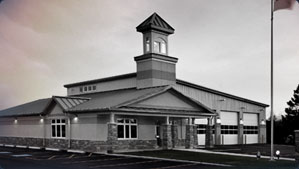